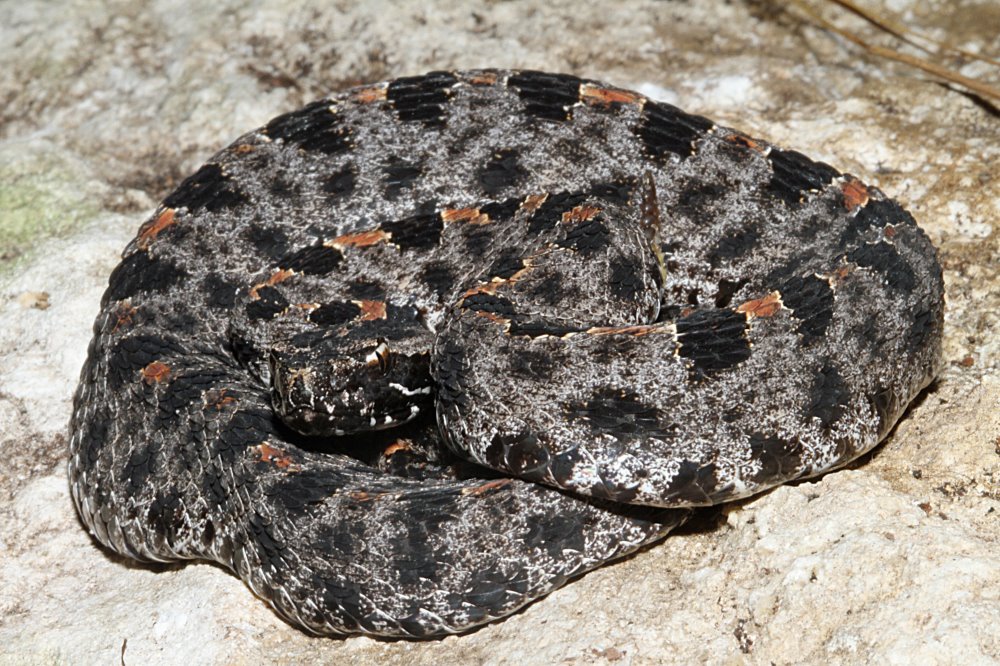 A Dusky Pygmy Rattler basks on the roadside.

Dusky is an excellent descriptive for this little rattlesnake, Sistrurus miliarius barbourin. The ground color is usually gray and bears a profusion of even darker stippling that is heaviest dorsally. Oval, light edged, black dorsal blotches are larger than the lighter, often orange, interspaces separating them and there is smaller light edged lateral blotches. The tail is dark on adults but yellowish on neonates and juveniles, bears a tiny tailtip rattle that is broken easily, but that is barely audible even when entire. The crown is dark with an orange(ish) central stripe that extends onto the neck. The chin and belly are dark with scattered darker blotches. A nervous snake, if approached it will usually tilt the head upwards and twitch. The tail is often also elevated and shaken. The yellow tail of the juveniles serves as a caudal lure. Prey includes nestling rodents, frogs, salamanders, and arthropods.

Sadly, the young of many harmless snakes (most commonly hatchling racers, rat snakes, and hog-noses) are mistaken for a pygmy and are summarily dispatched.

As suggested by its common name, this small but heavy bodied snake is adult at 15 to 24 inches in length. The largest example I have seen pushed 33 inches. It is common to abundant in some areas but entirely absent in others.

A viviparous species, between 2 and 9 young are produced in each clutch. Neonates measure a rather slender 6 inches in total length.

This subspecies ranges in brushy to lightly wooded habitats from southeastern South Carolina to southeastern Mississippi, and throughout Florida excluding the Keys. It intergrades with both the Carolina and Western subspecies at the northern and western extremes of its range.
Continue Reading "Common, Venomous, and Interesting, The Dusky Pygmy Rattlesnake"