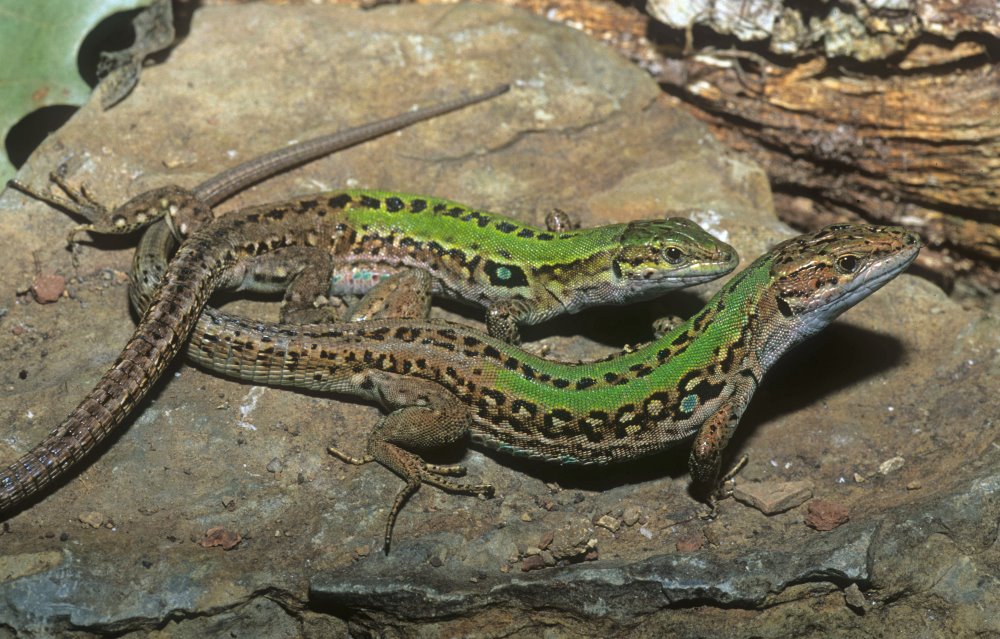 These are Italian Wall Lizards in NY.

No lizards of the family Lacertidae are native to the USA but as a result of the pet trade and deliberate introduction, 3 species now exist here. One, the Western Green Lizard, Lacerta bilineata, is restricted to the Topeka, KS region and is not discussed in this blog. The remaining 2 are both Wall or Ruin Lizards and are in the genus Podarcis. The species are the Italian Wall Lizard, P. siculus and the Common Wall Lizard, P. muralis, both common to abundant species in their European homelands.

Of nomenclatural interest is the fact that rather than subspecies, color and size differences in P. muralis are referred to as morphs, while P. siculus has been broken into so many subspecies that even the researchers can be confused.

Although subspecific/populational size differences can be seen in Europe, both species in the USA are of relatively similar length and overall appearance but generally differ markedly in color.

Both have an adult snout-vent length of about 3 ˝” and a tail, if in its original form, of another 3 ˝ or 4 inches. They are slender lizards that are of somewhat flattened appearance, especially on cool mornings when they are warming in the sunshine. Fortunately for observers the two do differ markedly in coloration as well as in current range in the USA. Both are habitat generalists, being equally successful in populating residential, agricultural, or dry fields or meadowlands. Both species can climb but the Italian Wall Lizard seems the more apt to use arboreal escape routes.

The Common Wall Lizard, P. muralis, is an overall sand tan and warm brown dorsally and laterally. Originally introduced in Cincinnati this little European lizard is now truly common in that area. It is also now firmly established in northwestern Kentucky.

The Italian Wall Lizard P. siculus differs from the Common Wall Lizard in having a green back and often some green on the sides. It is also at home in both residential and urban areas. It has been reported from CT, MO, KS, NY, CA, NJ, PA, but may now be absent in some regions and present in others.